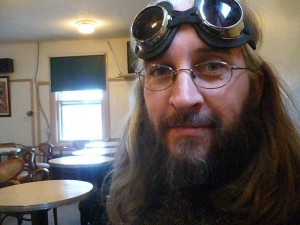 Born in Ottawa, Canada’s glorious capital city, rob mclennan currently lives in Ottawa. The author of more than twenty trade books of poetry, fiction and non-fiction, his most recent titles are the poetry collections Glengarry (Talonbooks, 2011), kate street (Moira, 2011), 52 flowers (or, a perth edge) – an essay on Phil Hall – (Obvious Epiphanies Press, 2010) and wild horses (University of Alberta Press, 2010) and a second novel, missing persons (The Mercury Press, 2009). An editor and publisher, he runs above/ground press, Chaudiere Books (with Jennifer Mulligan), The Garneau Review (ottwater.com/garneaureview), seventeen seconds: a journal of poetry and poetics (ottawater.com/seventeenseconds) and the Ottawa poetry pdf annual ottawater (ottawater.com), and has edited numerous collections for Chaudiere Books, Insomniac Press, Black Moss Press, Broken Jaw Press and Vehicule Press, and, in June 2010, a special “Canadian issue” of the Swiss online pdf poetry journal Dusie. He spent the 2007-8 academic year in Edmonton as writer-in-residence at the University of Alberta, and regularly posts reviews, essays, interviews and other notices at robmclennan.blogspot.com. He is currently working to complete another novel or two, a collection of short short stories, and a post-mother creative non-fiction work entitled “The Last Good Year.”

This interview was conducted over email from February 14 to March 1, 2011.

How do you work your way through revisions? Do you have any tricks or theories to removing commas, words or lines?

rob mclennan: The only trick I can think of is patience, which isn’t really a trick. I trust my instincts pretty well, knowing what works and what doesn’t work, trying to discover how to improve or correct without specifically requiring to know consciously why.

I work my way through revision by marking up a copy of any piece and adding further sections in my notebook (during my day of wandering around writing, whether Second Cup, the Rideau Centre food court, The Carleton Tavern, Raw Sugar Café or any number of other regular haunts) before returning home to enter changes into the computer, and print off a further copy for the subsequent day, and repeat as necessary until the particular piece is complete. It might not sound like much time to compose, say, forty pages of writing in two months, but if there are daily printed drafts of the work, that’s an enormous amount of writing and revision.

rob mclennan: Clarification, perhaps. I think revision might illuminate. In certain ways, much of the last six months of work on my second novel, missing persons, was in working to understand the depths and nuance of what I had already accomplished. So I could properly develop what I’d already begun. Hell, the last six months of composing my first novel, white, was trying to fit the entirety of it back into my head so I could discover the holes and then fill them. The result was no more than two further sections in the right way, in the right places, each less than a page. Six months that took me.

Revision is extension? I don’t know. At this point, and for a number of years now, revision is so tied into my compositional process that I find it impossible to distinguish. Even this interview has already gone through a number of drafts, and its only four answers long.

I think much of my poetry editing process happens in my head, well before it hits the page, and has become more a matter of tweaking once a printed draft exists than an all-out tearing. A tweaking, or even a process of reordering, and removing poems altogether as a manuscript begins to cohere. On the other hand, prose still goes through many more multiple drafts, from reviews to essays to short stories to novels. Perhaps I’m not as confident or as practiced in the form.

Or even: revision is. How terribly zen.

Any pet peeves when it comes to editing your own work or someone else’s?

rob mclennan: Not specifically, other than feeling perpetually behind. Literature demands attention, after all.

rob mclennan: In January, I was house-sitting for Stephen Brockwell in the Lindenlea neighbourhood, just near Beechwood, east of the downtown, and putting the final touches on a poetry manuscript, “If suppose we are a fragment,” and was writing notes for what ended up being the second-last section, “Linden lea.” I was attempting a suite of single-page poems, perhaps a dozen or more, to exist as some kind of combined reference/homage to the neighbourhood I was exploring for the first time, which included this first draft:

a stretch of house the day
could only muster,

some wrong is done; avenged
a tongue skin silky porcelain

When I originally was crafting the piece, I knew I liked the “front step” line as my final, but felt as though the poem required a couple more steps between it and the line before, so I scrawled a couple more that I slipped in, there. It’s interesting, I used to write out draft upon draft upon longhand draft, going through stacks of lined paper, but these days, the poem gets carved up pretty well between those initial thoughts and the first draft of page, an intense process of attention before the first lines are even drawn. Once a poem is there in the notebook, there can be a process of complete gutting and re-ordering, abandoning completely (which happens more regularly these days) or a series of tweaks. This is one of the ones that required a simple tweak.

A stretch of horse the day
could only muster,

some wrong is done; avenged
a tongue skin silky porcelain,