Marcus McCann is the author of Soft Where (Chaudiere Books) and eight chapbooks. He was shortlisted for the Gerald Lampert and Robert Kroetsch awards, and in 2009 he won the John Newlove Award. A journalist by trade and curious by inclination, McCann is an editor at Xtra in Toronto and Ottawa. We’re happy to have him at Poetic Edits… 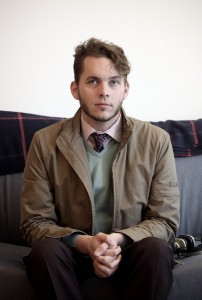 Marcus McCann: The other poets you’ve spoken with seem to have answered these questions so well. I agree with a lot of what’s been said: that it’s hard work, that distance helps, that a good editor is essential.

One further thought: immediately before a poet sends a poem to its first reader, there is a moment of panic. And it’s very productive. For me, that first reader is usually my boyfriend Mark, and it’s usually a matter of hauling the text out of Microsoft Word and pasting it into the body of an email. Right before I send it, I always give it a frantic final read and I catch two or three lines or phrases that are really dreadful, and the pressure is on to correct it right away, before I hit send. That moment of pressure — deadline? — is unusual for poetry, and it sometimes helps. It’s happened a couple of times that I’ve gotten to that phase, and then not hit send, because the poem isn’t ready. It’s a moment of clarity.

That’s not the only time I edit. Most poems have to survive at least 5 rounds of edits; and of course, preparing the work for publication in a book or chapbook comes with its own editing process. But yeah, the minutes before I send a work to someone are usually an intense period of editing.

Marcus McCann: So much of poetry today works from source texts: cento, glosa, poems with epigraphs, retellings, translation (transelation, homo-linguistic translation), allusion, found poems, plunderverse, flarf, erasure, anagram, and so on. The creative act in producing a found poem, for instance, is the act of carving text out of one context and putting it in another. For erasure, the creative act is deletion. These are essentially poems created by editing, by revision. Revision as curation? Or as collation?

If you don’t think that revision is a creative or artistic act, then I think you’d have to discount a lot of the interesting work that’s going on in poetry today, namely those poems where composition takes a back seat to editing — or even where composition disappears completely, and the creative act is something we would not normally associate with editing. Revision is creation.

Do you feel any difference/make a distinction between editing a single poem all by its lonesome and editing a series of poems for a collection?

Marcus McCann: Editing a poem and a book require the same types of decisions — inclusion/exclusion, sequencing, revision, and so on. Take repetition. It’s something that you’re watching out for in a single poem — repeated words, phrases and ideas — and you’re trying to answer the question, “Is this repetition useful?” Because repetition is okay, as long as it adds some kind of resonance to the poem. And it’s the same for a collection or a series. I mean, it’s on a different scale, and so it doesn’t feel the same while you’re doing it, but they’re not that different, no?

Do you have any pet peeves when it comes to editing your own work or someone else’s?

Marcus McCann: Oh god. Consistency. I’m a stickler for consistent formatting. So, for instance, titles: do they get a capital? Word caps? All caps? Are the prepositions capitalized? And I want that to be the same throughout the book. Same for punctuation. It throws me when some poems are punctuated and others not in the same collection.

Other poets, of course, have other ideas. I’ve had the good fortune of helping edit two very good collections, one by Nicholas Lea and one by Pearl Pirie. Both Lea and Pirie have taught me a lot about writing. They both insisted I was wrong about that kind of formal consistency. So, I’m learning to let go. I think it comes from my career as a newspaper editor — in the back of my mind, I keep thinking, “What would CP say?”

Dressed in
the frilly undergarment
of apprehension,

These three lines first appeared a failed poem called “Exhibition Place,” which was a piece about living in a glass condo with no curtains. The poem miscarried. I’m not sure why, exactly, but I couldn’t seem to hammer out a structure for the poem. Eventually, it just died on the operating room table.

Luckily, every cadaver is full of organs. The line, with a new referent, was sewn into a new poem, “Poem on Multiplicity, with Accompaniment, Sung in a Natural Register,” which was a longish piece I wrote specifically for Michael V Smith’s Toronto launch of Progress at Grannyboots. It involved six voices speaking in dialogue, in partial unisons, in a round and in a cacophony. It required a lot of drone text that was intended to be more textural than lyric, so I was able to repurpose all kinds of things and Frankenstein them together. I’m not sure if anything will come of “Poem on Multiplicity,” but if not, perhaps I’ll be able to recycle some of those parts again.