Jonathan Ball is the author of Ex Machina (BookThug, 2009) and Clockfire (Coach House Books, 2010). He is the former editor of dandelion, and his writing has appeared across Canada, and in The Believer and Harper’s. We’re happy to have him here at Poetic Edits. 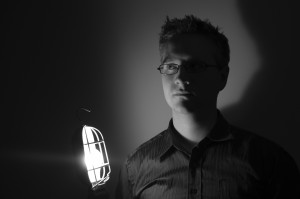 How do you work your way through revisions? Do you have any tricks or theories to removing commas, words or lines?

Jonathan Ball: My main “trick” is to know my weaknesses beforehand. I’m prone to passive voice constructions so remove those. I see adverbs as flags that I have used imprecise or bland words and tried to “cover them up” by telling the reader “this is how to read” via the adverb. But my main tactic is to isolate the best part of the poem. That image or idea or form. And then edit to strengthen or uphold, and then complicate, that core element. I also try to take each image or idea and consider it in isolation, how to make it bright and twisting and visceral. My main concern in editing is to make the work more visceral, since this is the single quality I value most in poetry, and also the quality poems tend to lose in editing. I also push the poem into different forms to see what works best, and think a lot about how I can make the form more interesting. The simplest “trick” for a writer is to pare things down – make poems as minimalist as possible given what you’re trying to do. Few poems should be longer than half a page. Poetry’s strength is in compression. The more words you have, the less impact any single word has.

Robert Lowell wrote that “Revision is inspiration.” To what extent do you think that’s true?  How would you rewrite Lowell: “Revision is __________”

Jonathan Ball: I hate it when artists say the word “inspiration.” If anything should be censored, it’s that. What does it mean? It’s a vague word for a vague process that nobody seems able to explain. I prefer Poe and his “Philosophy of Composition.” Any artist worth her or his salt should be able to explain their working process in that detail. “Inspiration” is so much a part of the artist’s vocabulary and ideology now that it should be excised as boring. “Revision is work.” There’s nothing nebulous about it. It’s a reasoned process of making logical decisions. At its worst, it’s “inspiration” in the sense of making gut-felt, instinctual decisions, none of which you can defend and which are therefore probably poor.

Do you feel any difference/make a distinction between editing a single poem all by its lonesome and editing a series of poems for a collection?

Jonathan Ball: I’m not interested in collecting poems. I write books. Single poems don’t need to be collected. Why bother? Why force them into some vague, bland frame? My most recent manuscript, The Politics of Knives, is close to a collection, in that I didn’t at first intend the poems to work together in a book (but published them as separate chapbooks), but later began to think of them as something of a larger project, something I was working out in spurts, and wound them together, and rewrote them as a unit, so that I think they hold together as a book rather than a collection. But maybe I’m wrong and blind to my own failures. In which case, to answer your question, I settle on a coherent concept for a book, with a limited formal approach, and select/edit individual poems to then “fit” into the book rather than stand on their own.

Do you have any pet peeves when it comes to editing your own work or someone else’s?

Jonathan Ball: I’m sick of all these boring, bland emotions that everyone thinks are precious and worth writing about just because they have them currently or had them once. And thus perceive as universally interesting throughout epochal time. Always the same emotions, communicated the same ways. If you put an original spin on it, find a prettier way to say it, it’s still a cliché. My joke is that as a straight, white male, aged 18-35, I feel my emotions are adequately represented in the culture. I edit to strip out emotion. If any emotions remain, they are then connoted or otherwise fundamentally tied to the language and tone and therefore necessary, or result from collusion between language and reader, and my ugly face is out of the picture.

Jonathan Ball: This is a question I ask others to answer in the “8-Ball” interviews on my website, in a different guise, but few people answer the way I had hoped. So I’ll attempt to answer my own question, as I see it lying dormant in this one: “What is your process for a typical piece of writing, from idea to publication? (Give a specific example.)”

A while back, I decided to write a poem attacking Stephen Harper, for a call sent out about a brilliant little chapbook/magazine called Stephen Harper. The publication never materialized, but it was the brainchild of Natalie Zina Walschots and Ryan Fitzpatrick, two friends of mine, who wanted to create a publication whose forced subscribers would be MPs across the nation. This was a response to the Conservative re-jigging of the Canadian Magazine Fund. So I wrote my poem and sent it in, and also posted all on my blog. I’ll reproduce the full post here, despite some inaccuracies regarding the noted policies I now notice:

Stephen Harper is in my face again. Why? What did I ever do to Stephen Harper? Why must I always feel at war with my own government? I just want to pay my taxes in peace.

It’s not enough that the government wants to impose bizarre regulations on the Canadian Magazine Fund, effectively destroying the literary periodical industry by limiting funding to periodicals with circulations less than 5000. No, they also have to try to kill SSHRC by making it fund only “business-related degrees” (I don’t know what kind of “business-related degrees” people get in the Social Sciences and Humanities).

The only good to come out of this is a new literary journal, Stephen Harper, run by Ryan Fitzpatrick and Natalie Zina Walschots. Their call for submissions is below. But first, my own contribution, composed mostly of lines from this CNN interview with Harper:

If there is one thing
that could turn a recession into a depression,
it’s Stephen Harper.

If any country
doesn’t respect its obligations,
then Stephen Harper.

I think this is a debate we would rather avoid.
You can’t “Buy Canadian” but you can buy Canada.

Later, I heard about a call for an anthology edited by Stephen Brockwell and Stuart Ross called Rogue Stimulus: The Stephen Harper Anthology for a Prorogued Parliament. The Stephen Harper magazine looks like it’s dead, so why not send my already-written Stephen Harper poem?
But then, looking at “That said, Wolf” later on, with some emotional distance, I’m disappointed in the work. I realize that the poem cannot be salvaged, because it simply restates my opinion, which is best expressed not in poetry but in essays or articles. So it may stand as published and submitted online, but will never be collected or reproduced elsewhere unless by others. My “second draft” will be a total restart, from Word 1.
I try something more subtle, something that sounds less like an attack ad and speaks more to my complicated, semi-nationalist feelings. We get the politicians we deserve, and the nation we deserve, and my conflicted love and horror of this country, its history, its future, and even mundane things like its weather, strikes me as not dissimilar from the emotions that I feel about religion in general, and my Catholic background in particular (even if you turn atheistic, Catholic guilt will never let you go) – since Harper is a religious man, why not move the poem further in this direction?
Instead of attacking Harper, I will address myself to him. “O Stephen Harper” is the obvious choice for a title. After a few more drafts I have a poem I’m happy with, one that doesn’t stand as an attack on Stephen Harper but is struck through with what I’d like to think is a profound ambivalence:

O Stephen Harper, I am moving to your riding,
tell me what wine I should bring.

O Stephen Harper, I am casting my vote
in bronze to await your majority.

O Stephen Harper, if a fisher of men
then your nets will be choked with such fish.

O Stephen Harper, if there are bailouts
then this boat could use a bailout.

O Stephen Harper, what can you do,
you are only one man and I’m an ocean.

O Stephen Harper, with your thimble
you must move my beach from here to here.

O Stephen Harper, there is a second death
and it’s coming and everyone’s waiting.

O Stephen Harper, something walks on the waters,
it looks human and we are all scared.

I’ve lost my earlier drafts of this poem – so this is how it appears in the Brockwell/Ross anthology. I like a lot of things about this poem – how it’s political, but also personal, yet not particularly expressive, and more concerned with sounding the depths of what politics means in our psychological and religious lives than making a point about how one should vote or not vote. Stephen Harper is more a void that we fill with our own hopes or anxieties than a real person, so I put in a reference to Lacanian psychoanalysis alongside the references to Christian mythology, although I tried to do it in a way that won’t bog down or ruin the poem for someone who doesn’t notice the reference.

I also like the turn where the final allusion to Jesus becomes monstrous, which in itself is inspired by the story where Jesus casts out the demons into the swine, after which he’s asked to leave the land and never return – ironically, Jesus as monstrous is something I’ve kept intact from the Bible stories, as opposed to how someone like Harper would want to read Jesus, or how he sometimes comes across as a castrated hippie in the modern age.

Like I say, I lost the original drafts, but I did another revision of this poem recently, nothing substantial, but I changed these lines slightly:

O Stephen Harper, I shall move to your riding,
tell me what wine I should bring.

O Stephen Harper, I shall cast my vote
in bronze to await your majority.

I’ve used “shall” for a more “prophetic” tone, and because “shall” is declarative. Otherwise, these final edits are embarrassing, Writing 101 edits on an already-published work: “Eliminate unnecessary passive voice constructions in order to add force to your writing.” I include this for any of my students who read this, to show that not only do I ALSO make this mistake, I ALSO deserve reprimand whenever I do!