Jacob McArthur Mooney’s Vox Populism is indispensable. His Retail series preview upcoming poetry titles from Canadian presses, an ambitious undertaking that has helped to establish a platform for the discussion of Canadian poetry and poetics. Mooney’s also a brilliant poet in his own right. His debut book was the much acclaimed The New Layman’s Almanac. He is a recent graduate of the MFA in Creative Writing program at the University of Guelph-Humber. Look for his new book Folk, which will be out this month in a bookstore near you. He was kind enough to answer my editing questions: 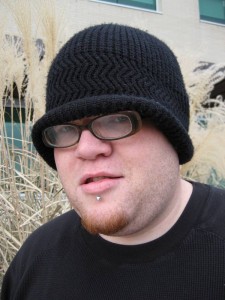 Jacob McArthur Mooney: Revisions are what matters, aren’t they? I can say, about the revising process, that it’s the time when I feel the least useless as a poet. First drafts are all happenstance for me, a line that arrives as the product of two previously unpartnered thoughts, a place to break that line, an idea for a follow-up line, and we’re off. But revisions are brokered, they happen in appointments, typically they happen in a room with a lockable door.

I like the subtle linking in that question of “theories” and “tricks”. Are theories just an assemblage of loose tricks? Probably. I can say that I like to try and read lines in different ways, read it slowly, quickly, aloud, silently, after watching TV, after reading another poem. The point here is to jar myself out of whatever single aural affiliation that line was being tailored too, to try and make it work for people who don’t already *know* how to read the line, to try and trick myself into reading it like it’s new, like I haven’t been over it 1,000 times. That’s tough. You realize, three months in, that you’re forcing a stress on a second syllable because it makes the rest of the line (and, by extension, the poem, all the poems, your life, the universe) scan cleaner and sound better. So revision, at least line-revision, for me is mostly about keeping yourself honest, pounding out the kinks without lending a bias to a single approach or doctrine-of-sound.

Jacob McArthur Mooney: Maybe Revision is re-inspiration? Or revision is rehydration? Or maybe Lowell got it right the first time. I see what he means. Again, I feel more like “a poet” when revising than when writing first drafts. A successful editing session can carry you along on a heady surf of successive minor a-ha moments. Of course, a bad one can also just drown you in that same metaphor.

What are three pet peeves when it comes to editing your own work or someone else’s?

Jacob McArthur Mooney: For my own work, I’d say that I’m always amazed, and frustrated, to miss the forest for the trees. Like, I’ll hypnotize myself trying to figure out where to place a comma and miss, say, the fact that I repeated the word “ambassador” three times in a 10-line poem.

For others, I hate the idea of revision being a lessening of some original insight. Most original insights are unoriginal, of course, and this is something I see less of as my “peer group” of poets is maturing along with me. Revision (shared revision) isn’t about dulling the edges of the bright, shiny, ax of your brilliance, it’s about pushing the self-expressive source of a poem forward towards its end goal of person-to-person communication. A poem is more an act of translation than an act of self-expression, anyway. Translation is a social gesture, so it benefits from the attentive, patient, eye of another person.

Jacob McArthur Mooney: Sure. Here’s the middle section of a poem called “Polaroid of a Living Room in Lunenburg County”, which will be in my new book called Folk, coming out at the end of March from M&S.

In the den a dog and a cat
are accompanied by what
their insertion offers up
(respectively unashamed allegiancess,
and practiced
sensuality, respectively). Shed slivers
of their costumes twist
into the carpet. Vacuuming just presses in the hair.

Nothing is suggested of action or intent.
The furniture assumes a stoic pose. It’s a captured negation
of time’s forward progress, the story of the light along the walls.

And here’s the final version from the proofs I submitted in January:

In the den a dog and cat
are accompanied by what
their insertions indicate
(unashamed allegiance,
practiced sensuality). Shed slivers
of their costumes twist
into the carpet. Vacuuming just presses in the hair.

At the window,
no dandruff has gathered to dance or be deposited.
The furniture assumes a stoic pose. It’s a captured negation
of time’s forward progress, the story of the light along the walls.

My editor suggested the parenthetical insert in lines four and five were a touch mouthy, and I agreed. I don’t think ‘respectively’ added much, and was there more for rhetoric than anything else, trying to suggest a certain bemusement to the speaker. I think the idea is tickled enough with itself to not need any help from tone.

I thought a lot about cutting the caesura before “twist” but didn’t. The point is to set it apart both visually and syncopate that space after “costumers” a touch, try to give it a half-breath. Still not convinced it works….

The “At the window”… bit is just dressing (pardon the pun), but it’s there to set up the following line, which I think is a heck of a lot better than the rather listless, “Nothing is suggested of action or intent”.